I’ve been looking at Capilano Honey for some time now and recently purchased a position after they released their half year results. Since then the price has had a fairly sharp rise, moving up to around $11.60 from my purchase price in the low $8s. This was likely on the back of the half year result. There has been some brokers initiating coverage which always helps especially with stocks like this with such limited liquidity.  I’ve gone over some metrics of when I purchased and based on the current price. At this price it’s no longer the bargain it was but I still think there remains some upside in the price with the potential for more if things go their way.

CZZ is Australia’s largest packer of honey and has been in operation since 1953. Packer is key here as they access their honey from approximately 500 apiarists around Australia whom they have entered into supply agreements. The Capilano brand is the company’s core product and is sourced entirely from Australian honey suppliers. Retaining the brand as 100% Australian honey is a key objective for Capilano. This has been achieved despite poor honey supply in recent years. Additional brands owned by CZZ include Wescobee, Beevital, Smiths and Allowrie.

To offset some of the decline in local honey supply, CZZ import honey from suppliers, largely from Argentina. The honey is then blended with local supply and used in the less premium products such as Allowrie.

CZZ has three production facilities: Richlands, Brisbane; Maryborough, Victoria; and Perth, Western Australia. Richlands is the largest facility, having capacity for around 40,000 tonnes. The Maryborough facility has been suspended, however will be reopened following the recent acquisition of Chandler Honey.  They have significant excess capacity available to them.

CZZ is the largest and most recognised honey packer in Australia. Its market leading position is protected by barriers to entry that exist in the honey industry. Despite a lack of honey supply, being one such barriers to entry, CZZ have alliances overseas which means they can import supply during lean years. They have also successfully been able to negotiate increases in their wholesale price which has meant margins have been maintained and will ultimately benefit them as retail honey prices stabilise in the future. The company has a strong balance sheet, high free cashflow and limited capex requirements. A lower earnings multiple is probably fair given the risk of honey supply, however CZZ seems to be trading well below fair value. Earnings for FY15 should come in around $7m which at the time of purchase places them on a PER of 10x (based on a share price of $8.25). The share price has since risen sharply to $11.60 or the equivalent of a PER of 14x. I think this represents a much fairer price however there could be further upside if weather conditions become more favourable, higher margin products such as Manuka are increased and as cost initiatives continue.

Note that I’ve calculated underlying figures to strip out insurance proceeds and damage caused by fire.

CZZ is the leader in the market, with around 70% market share, the bulk of which (50%) comes from the premium Capilano brand. The number of large scale honey packers continues to consolidate with CZZ purchasing both Wescobee and Chandler Honey in recent times. Their main competitors are Beechworth Honey, Ancient Distributors, Byron Bay Honey and private label. Private label has been a significant threat to various retail products, however given the limited retail honey supply, private label sales have been reducing over the past 12 months. Additionally, the major supermarket chains make higher margins from CZZ’s branded products than they do from private label.

CZZ’s market share and leadership position is protected by the high barriers to entry that exist. The greatest challenge to competitors is accessing the dwindling supply. Significant capex and scale would also be required to be competitive against CZZ. These features make it unlikely that their competitive position could be threatened. 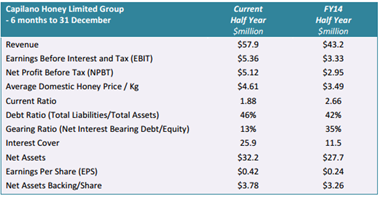 Capilano recorded a strong result for the half year with revenues and earnings rising 34% and 73%, respectively on the 1H14. This was an impressive result given domestic supply was limited and the increased input costs from rising honey prices. The result was helped from two factors:

1 – CZZ were able to increase the wholesale price at which they sell to their customers (i.e. Woolworths, Coles). This resulted in top line growth and meant margins could be maintained. On a higher revenue base, earnings were magnified.

2 – A lack of domestic supply and CZZ’s ability to import supply, in some cases where other competitors do not, led to a large increase in market share.  FY15 will see the level of imported honey increase significantly.

From speaking with CZZ, it seems likely this wholesale price will be maintained even if there is a drop in the retail price. Where domestic supply improves there will be a two-fold effect on Capilano.

1 – Retail prices will come down and with a steady wholesale price, margins will rise.

2 – Increased supply will reduce the reliance on importing and allow CZZ to focus on export markets. CZZ have production capacity for around 45,000 tonnes of honey compared to the supply in recent years of around 10,000 tonnes.

There is a risk that domestic supply will continue to drop which will ultimately lead to further increases in the retail price. To maintain margins CZZ will need to pass on additional costs which may not be possible, however they have been successful in achieving wholesale price rises in the past. They are in a better position to negotiate given their market share.

As can be seen below, supply for CZZ has dropped off over the past 10 or so years. The honey supply is contingent upon favourable environmental conditions and can be volatile from year to year. With recent acquisitions, such as Wescobee and Chandler Honey, CZZ has diversified its honey supply across Australia and is less susceptible to localised poor weather conditions.

CZZ has historically had a requirement that beekeepers must also own a specific number of shares per bee hive. This has recently been removed likely as it was prohibitive in attracting new supply. It also however raises the question of how loyal beekeepers will be to CZZ. With limited supply there may be increased competition between packers to attract new supply sources. 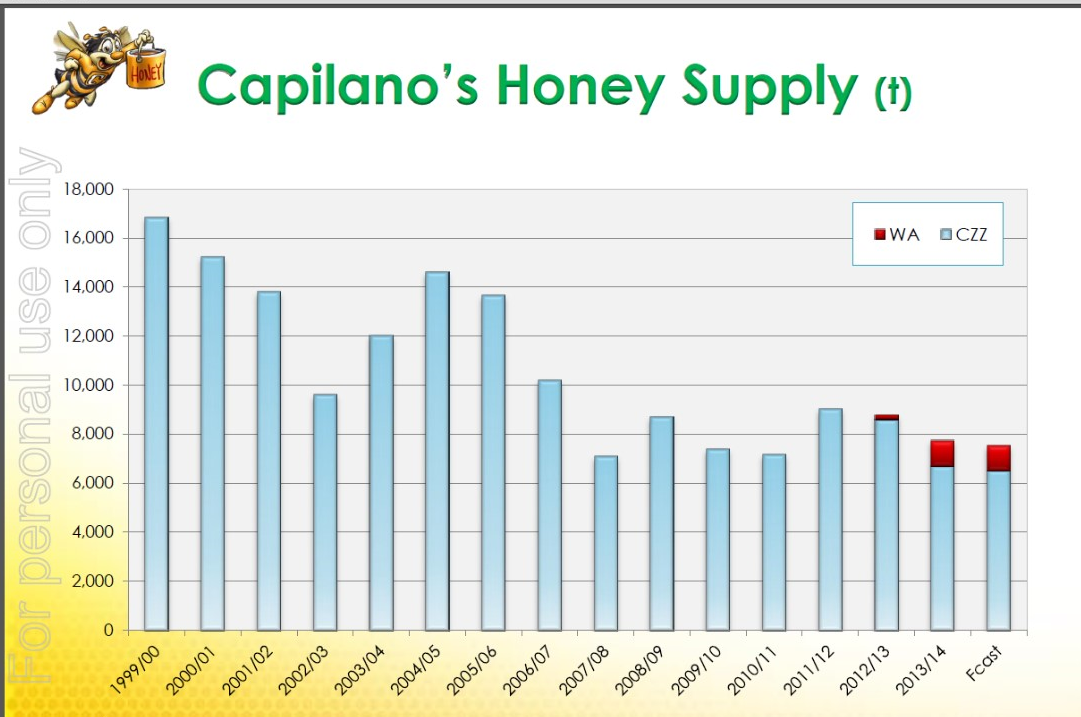 With the decrease in supply, the retail price of honey per kg has continued to rise, currently around $5 per kg. As I mentioned earlier, CZZ have been able to pass on these recent increased costs to their customers. Any further increases in the honey cost could hurt margins if these cost increases can’t be passed on. It is worth noting that recent years, in particular FY 14 have been among the worst in recent times. CZZ management have noted that conditions have started to improve, however it remains early days. If supply does increase, prices will likely fall somewhere towards the $3 range and there will be an immediate benefit to margins. If prices remain where they are, CZZ still looks attractive – the investment case is not dependent on supply increasing and prices moderating. 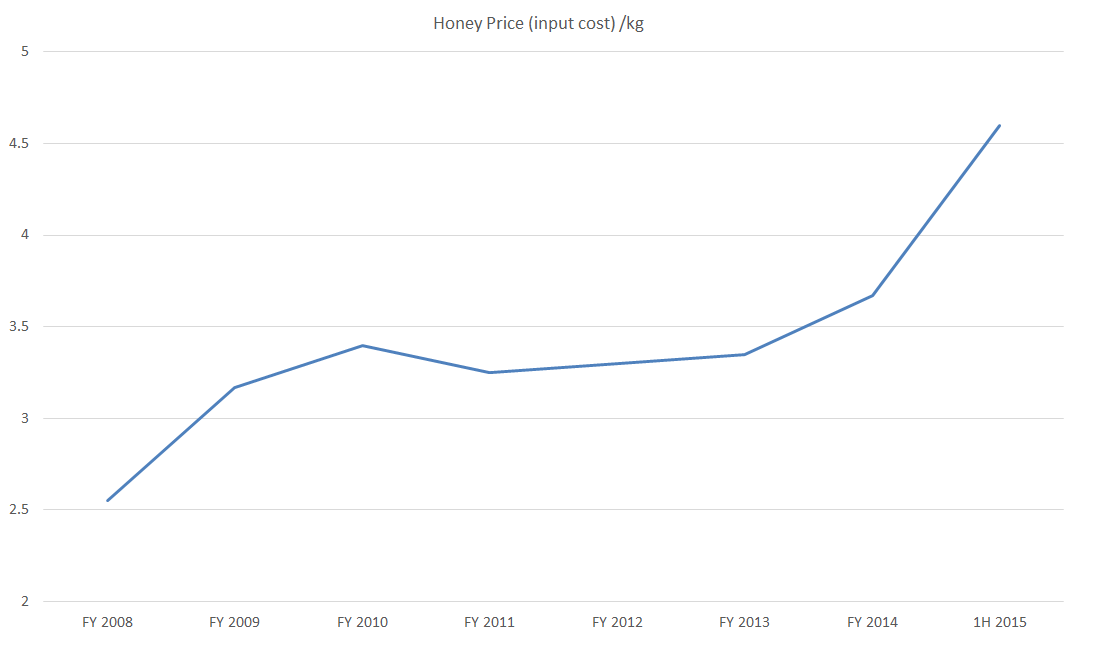 There is no danger in demand dropping off – Australian demand currently outweighs supply and there is also strong demand internationally particularly from Asia. Demand for honey has also increased as consumers become more health focussed and honey is used as a substitute for sugar and in various health products. Certain varieties of honey produced (Jarrah, Manuka, Jellybush) also have antibacterial qualities and are used for medical purposes. CZZ currently produce both Jarrah and Manuka products, which are higher margin products.

I won’t go over the financials in great detail here. The fire that occurred in the 2013 FY has somewhat distorted the income statement and ratios for FY13 and FY14. The company benefited from insurance proceeds which exceeded the extent of the fire damage that was expensed. The raw materials and consumables are primarily associated with the cost of honey. On an underlying basis the gross profit for FY14 was 44%, decreasing from 46% in FY13. I’d expect the gross margin to remain reasonably consistent with FY14, perhaps declining slightly, as rising input costs and increases to the wholesale price counteract. This has the potential to expand should the honey price reduce. There are also several fixed costs and margins would rise further as the top line grows.

The balance sheet remains strong:
Free cash flow is strong – approximately $8m in FY14. The 1H15 FCF was around $5m, however it was assisted by the build-up in payables.